We Haven't Moved Yet...But HE Did! 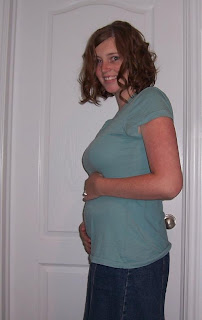 It's official! The little guy kicked my hand! Alicia was sitting on the couch yesterday and called me over cause she felt something, so then after two or three false alarms and waiting forever, not sure if I actually felt something or if it was just Alicia's breathing...he kicked twice!

I was so excited because up to this point I've felt like the doctors were just playing a cruel trick on us and telling us there was something in there, but now we've made contact! Ha ha.

It felt like a good strong kick, so I'm sure he's going to be a great athlete, make millions, and take care of Alicia and I in our old age. Sorry I couldn't do that for you Dad! Ha ha.

We'll hit the 20 week mark on Wednesday, and only two more weeks before we begin THE THIRD TRIMESTER!! Scary huh!

It's crazy to think that a little Josh will be runnin around here soon.
Posted by Josh at 12:37 PM