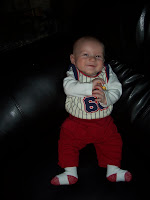 Well Levi was three months old last week on the 22nd. I can't believe how fast the time flies. He is such a good baby and sleeps well. He is talking and laughing a lot. This past weekend we went to my grandparents in Buena Vista for Saturday. A trip that should take 2.5 hours took 4! Levi slept the whole way which made the icy snowy roads that much better because we didn't have a screaming baby. We made it and my cousin Kristin did my hair and we spent the day with family. We had a great day, but we had to be back home on Sunday for church because we both had to teach, so we headed back towards home and went to Breckenridge to stay with Dustin and Jen at Jen's families cabin. Levi slept for that two hours and then the whole night as well! Sunday morning we left there at 7 and he slept the rest of the way for us home. He has been such a good baby we feel so blessed. We are crossing our fingers and hoping he will stay a good sleeper. Happy 3 month birthday Levi!!! We love you!!!

Yes, we are very behind. We have had a very crazy last couple of months. We had Thanksgiving with my family this year. We are on the opposite schedule as everyone else in my family so we were the only ones out of my brothers that were going to be in Granby for Thanksgiving. So we went with my parents over to my cousins house in Buena Vista for dinner. We had a great time showing off Levi to my cousins and family on the Wilder side of the family. 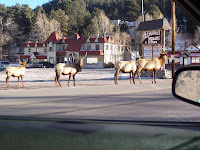 at any of their time share spots. Well , we were so excited to go somewhere cool, but we procrastinated and weren't able to book 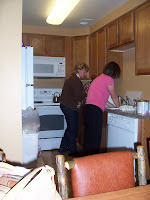 at our top choices. Our year and a half 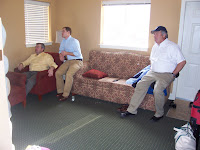 would be up at the end of January so we decided to just go for a fun local vacation; we went to Estes Park. Josh had never been there so that is what we did. We were able to get a two bedroom, two bath, condo there and we had a blast! Corey, Maria, and their kids, and my parents; Dustin and Jen met us there too. It was a freezing cold weekend, but we had fun staying indoors, playing games, watching football, and lots of eating. This was our 4th anniversary weekend! I can't believe we have been married for four years!!! Time flies and it was so fun to be with everyone and our little Levi for this anniversary.

On the 22nd of December we flew to California, and our flights got mixed up and we weren't going to be able to make it to California until the 23rd, but as we were walking to the terminal for the first leg of our flight we heard our names being paged to come to the desk. So we ran to the desk and they said we got you on a different, but direct flight to LA, but it is boarding right now so you will have to hurry! So we took off running through the concourse, and I had Levi trying to sleep in a front pack and Josh had our two carry on bags. Needless to say we made it on the plane just in time, but our luggage did not! Levi enjoyed his first flight without making a sound! The people in front of us turned around at the end of the flight and said, "We didn't even know you had a baby on her 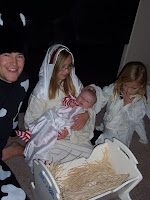 e, he was so good!" He was very good and it was a nice flight. 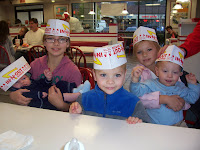 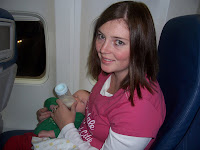 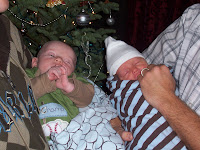 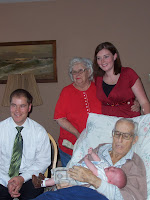 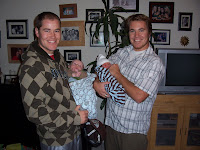 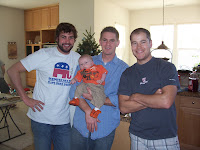 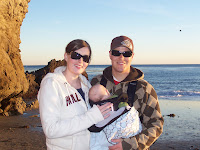 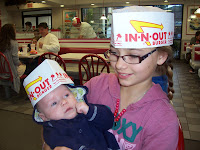 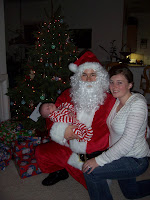 Well, as I said earlier our luggage didn't make it on the flight. They told us that it was coming in on a later flight that night and that they would have it delivered the next day. We said that was fine and Jared and Jenni were there to pick us up. So we left and went with Jared and Jenni to the LA temple to look at the beautiful lights; Trent and the kids were there also.

The next day, no luggage. Christmas Eve no luggage. Josh called and called that airlines telling them that this was our son's first Christmas and that we have no gifts or clothes for him, clothes for me, Levi's diapers, formula, nothing. Josh was the smart one and he packed all his things in his carry on. So they allotted us $200 to replace items that we needed that was not there yet. Also, since we had bought one of our tickets on our American Express, we called them and they gave us $500 dollars to replace items, including Christmas gifts because we were missing all of those things. We made $700 off of loosing our luggage! It was stressful but the funnest shopping spree of my life. I just went into stores buying basically whatever I wanted without even looking at price tags. I got new Christmas decorations, clothes, Levi, diapers, formula, etc. Our luggage showed up on Christmas night at 8:00 pm. So we even had Christmas. We got to talk to Danielle and we had a great Christmas, great food, fun, and family. The rest of the vacation we went to the beach, shopping of course, we went and visited Josh's Grandparents and Uncle, we had a great trip and it was fun to see everyone. Ryan and Anna also had their little baby on the 23rd. Shiloh is our new nephew and he is so darling. We are so excited for you guys and we can't wait to hold him and get to know him! We are excited that Shiloh and Levi are so close in age what good friends they will be be!

We came home from California on Sunday, where Josh's brother Kurt and his wife Polina were here on there vacation waiting for us. Polina had made us a delicious dinner and it was fun to have people waiting for us at our house! Monday we all went up to the mountains for the rest of the week. Jeremy and Terra and there boys were there. It was so fun to see everyone for our second Christmas and New Years. We went snowmobiling, skiing, and had a great week. It was so fun getting to know Kurt and Polina better we had a blast! Thanks for coming to visit!
Josh went back to Houston last week so I went back to my parents house. So this is the first week we have been home for more than a night in well over a month! It is nice to be home. I just took down our Christmas decorations this morning. On Saturday we went over and helped Dustin with his hard wood floors in his new three-plex. He and Jen are working so hard on it and it looks great! I just was called into the Young Women's presidency as the second counselor, and Josh is still first counselor in the Elder's quorum.

Today is Jared and Jenni's 2nd anniversary so HAPPY ANNIVERSARY! Sorry we didn't get a card out but we are thinking of you and hope you have a great day!!!!!
Posted by Alicia at 12:40 PM 3 comments: