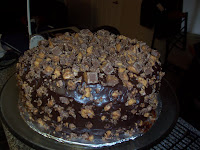 So I am in the Young Women's Presidency in our ward here in Lakewood, and last night we had a fundraiser dinner for our youth to go on youth conference. After the dinner we had a dessert auction. So yesterday afternoon I decided to make a Chocolate Peanut Butter Cup Cake. It turned out really well and went for $55.00 at the auction! Our youth did a great job putting on the dinner and the auction. We didn't have as many people there as we would have hoped. Actually only about half of the people we expected even came. However, the people that came, came with money in there pockets! Josh and I took $20 to bid on a dessert and couldn't even win with $20.00 because the lowest price that a dessert went for was $30.00! So we handed our money over to the elder's so they could buy another dessert. I think a lot of people were slipping them cash becuase they ended up with 3 or 4 desserts. With the amount of people that were there and the recession we were only expecting to make around $800.00 and we raked in around $1600.00!!! Our youth did great and we are so glad that the fundraiser was a success. The cake I made was really good but VERY chocolaty and very rich. I could only take a couple of bites of some leftovers I had. It was easy to make and looked pretty!
Posted by Alicia at 7:08 PM