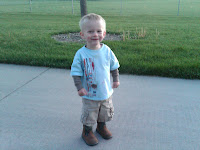 My son loves these boots! They are his choice if he gets one every time!!! Also, I don't fight him much, I decided with the boots to pick my battles! So he wears them quite often even when they are way out of place! 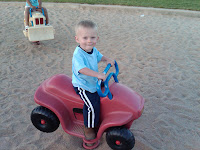 Playing at the park with Daddy! 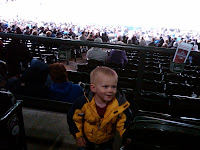 Levi at his first Rockies game! We had a blast going with Corey and Maria's family! 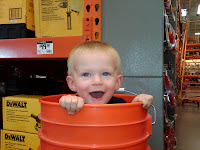 Chillin in the buckets at home depot! 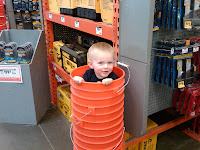 My future missionary, one of the missionaries in our ward got him this tag that says, "missionary in training" it was really nice of him and Levi loves wearing it! He also loves wearing glasses, and he looks pretty good too! 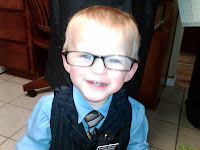 So this has been a really hard week. Levi is sick with this cough that will NOT go away! I took him to the doctor and they said it is a viral thing that is going around and the symptoms are fever and bad cough. The fever is gone so he is no longer contagious but the cough is lasting. Also there is nothing I can give him to help! He coughs so hard that he throws up. He has thrown up every day for the last three or four at least once if not twice if not three times! I am tired of cleaning up after him coughing. Also not much sleepting has been going on. Oh well, enough of the gross stuff. He is getting really funny, he will only wear cowboy boots, he says "ewwww" when he toots, and he LOVES the movie, "Cars." He also loves to look at airplanes, cows, dogs, and trucks. Levi loves his blanket he calls "kitty"and loves to shoot hoops (with or without a ball!) We love having this little spirit in our house that keeps us very busy and laughing! The other day after we got home from church I changed his diaper, but left his pants off because I was going to change his clothes, but before I could get his clothes gathered to change him in he found his cowboy boots. He came out of his room in his cowboy boots, diaper, and white church shirt, it was so funny! I have lost my camera so I wasn't able to get a picture but it was funny. Josh took one tonight of Levi in shorts and his cowboy boots so I will put that on here. It is so fun watching him learn and grow. We love you Levi!
Posted by Alicia at 8:42 PM