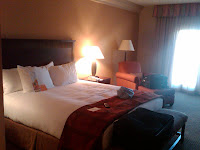 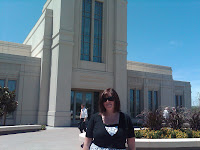 Gila Valley Temple, Thatcher, AZ. We didn't take too many pictures becuase it was 11 am and already a 110 degrees!!! The bride and groom only took pictures for about 5 minutes total! 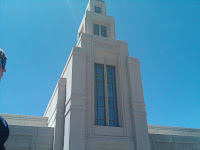 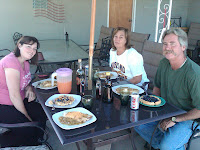 Eating Breakfast with Aunt Deb and Uncle Hank! We all look so nice as we just got out of bed! 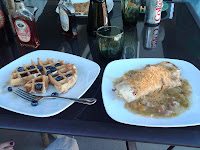 My Aunt and Uncle gave the choice between blueberry waffles or breakfast burritos made with fresh homemade green chili sauce and Josh picked both so he GOT both! This was an amazing meal! 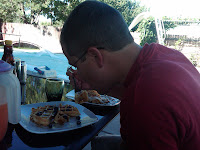 Kind of bummed but this is the only picture we got of the pool behind Josh eating his breakfast. We had a blast swimmng and playing with my cousin and her kids while we were in Farmington. 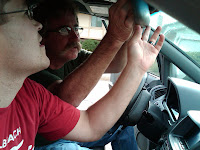 Josh and Uncle Henry fixing the mirror (it took them about and hour and a half to fix so I thought it deserved a picture!

This is a sign that I have seen growing up visiting Farmington but Josh thought it was hillarious. It is an Adult Book Store with a Catholic Billboard in front that has a picture of Christ and it says, "Jesus is Watching you" My Aunt said that is billborad is famous and has made it onto the Jay Leno Show! 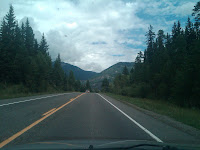 This is outside of Pagosa Springs Colorado starting up Wolf Creek Pass. This area of Colorado is beautiful and we decided we could someday live there. It is amazing! 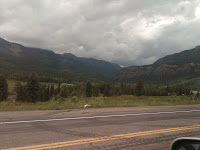 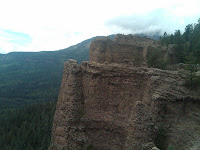 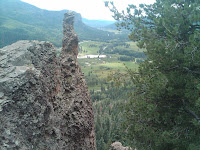 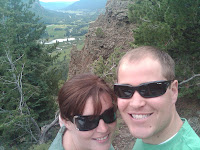 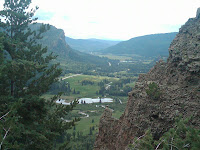 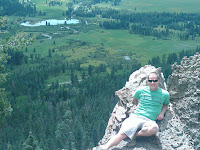 Josh made me very nervous with this picture as on both sides of this rock he is laying on are a straight down drop about 200 feet.
Josh and I headed to Mesa Arizona for Jarom's wedding. Jarom is Josh's best friend from high school. I took Levi up to Granby on Thursday to stay with my parents for the weekend as we were going to do a lot of driving! We left Friday morning at 4 am and drove 14 hours to get to Mesa that night for the pre-night reception. As we pulled into Mesa it was 113 degrees! I don't know about you but that is way too hot for me especially at almost 6 months pregnant! We were able to stay at the Hilton with Josh's hotel award points, it was nice and had great AC!!! We got ready and went to In-n-out for a bite to eat (even though there was dinner at the reception) we can't miss an opportunity to eat there! Then we went to the reception witch at 7:30 was still 108 degrees. It was soooo hot. We stayed for an hour as I was melting in an outdoor reception! I even asked Josh if we could go to the shade and it was dark out. I am not understanding the draw to Mesa AZ in the summer! The next morning we went to the Gila Valley Temple with was in Thatcher, AZ for the wedding. That was a two and a half hour drive. Then after the beautiful ceremony we went to a luncheon and then we turned and drove 8 hours to Farmington, NM to spend the rest of the weekend with my Aunt Debbie and Uncle Henry. Northern NM was a lot cooler and close to Denver temperatures and was really nice. It was fun to spend Sunday with them before we had to turn around and drive another 8 hours the rest of the way home monday. We had a great time just Josh and I. Levi was mad at us when we picked him up, but he did really well while we were away and was spoiled by my family! Josh only got pulled over once so we think the trip was a success!!!
Posted by Alicia at 10:21 AM