Although our 4th of July weekend didn't work out quite like we had planned, we still had a blast.  We were bummed to find out that both the Hamiltons and the Candias had to back out due to illness, but hopefully everyone still had a good time.

We headed up to Granby Friday night and all of Alicia's family was camping, so we joined them for a good camp fire up in the mountains.  Alicia and I camped the rest of the weekend in the Trails backyard...30 feet from clean flushable toilets, a shower, and good food!
On Saturday we went up to the Granby airport for the freedom flight fly-in where a ton of smaller planes from all over the state come in and show off their planes, doing cool fly-byes and stunts.

Later on Saturday we went for a hike around Monarch Lake.  The kids were pushing us to go faster on the way there and then wanted us to carry them on the way back! Ha ha.

After the hike we found some garage sales and the Trails ended up buying some bumper boats!  Of course we had to try them out, and when we asked the lake inspector if we could put them in the lake, he said "Good Luck!"

After the lake, we went to Miyauchi's Snack Bar for some chili cheese fries and ice cream!  Since Alicia worked there for 6 years and still knows the owner, she always gets some hookups with free food. 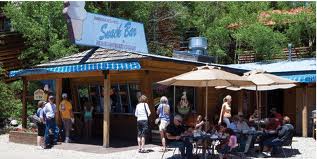 Are you totally jealous already???  We've only gotten through Saturday!  On Sunday we enjoyed great church services and some of us even got to talk to David Nixon, a former BYU football player who is now with the Oakland Raiders.  Sunday evening we enjoyed a picnic in the mountains.
On Monday we enjoyed what used to be a good parade, but this year was not much more that cars with some ribbons, and like 5 pieces of candy...total!  The highlight was that they had every fire truck in the county (like eight) and they would spray their fire hoses into the crowd to cool us off.
Later we went to Lake Granby and played on the beach and in the water before heading up to Grand Lake for a hike to Adam's Falls, dinner at the snack bar, and fireworks!!!
Here are some pictures of our camping.  The morning I took these Alicia had taken Levi into the house cause he got cold and wouldn't go back to sleep.
We hope you all had a great 4th of July weekend!
Josh, Alicia, Levi and Luke
Posted by Josh at 9:42 PM