Book of the Month (March - May)

In keeping my New Year's Resolution to read at least one book per month, I wanted to catch up with my reviews as I haven't posted for this since February.

MARCH - Harry Potter and the Deathly Hallows by J.K. Rowling

So I'll admit that I've read this book before, but seeing as the second part of the movie was set to come out this summer, I wanted to re-read it to remember what had happened.  Also, it was convenient as I had it on my iPod and could listen to it in the car on my way to work.

RECOMMENDATION: Must read for anyone who doesn't mind learning about witches and wizards, magic, and all sorts of unusual people and creatures.

ABOUT THE BOOK: While some say the Harry Potter series is somewhat childish, I find them very entertaining.  J.K. Rowling pulls you into a world of fantasy and magic with the Harry Potter books.  I mean, who doesn't want to be able to perform magic?  I also found that Harry Potter is a good story about the triumph of good over evil, but doesn't leave out the fact that good doesn't ALWAYS win.  There are some tragedies and struggles that Harry and his friends must go through, and learn to deal with if they are to reach their ultimate goal of destroying Lord Voldemort.

I chose to read this book because I'm always looking to improve my workplace performance, and I found this book on the bookshelf outside my Partner's office while waiting to go into a coaching meeting.

RECOMMENDATION: Good, easy read that really makes you think about the way you approach leadership, your goals, and things you want in life.

ABOUT THE BOOK:  The book was easy to read as it is written in a parable (story) format, while teaching lessons as the parable progresses.  Adir (your conscious mind) the ant gets lost from his colony in a storm one night and is surprised to find out that he has been living on the back of Elgo the elephant (subconscious mind) for several weeks.  Through the help of his mentor - an owl - Adir learns how to control and lead Elgo (who is much larger and more powerful) in order to reach the oasis, their vision of paradise in the African Savannah.
This story illustrates that understanding the relationship between conscious and subconscious thought is the first step toward becoming a leader who can transform workplace performance.  You learn to overcome the frustration and obstacles that will surely come so that you can accomplish your goal.

MAY - If You Want It Done Right, You Don't Have to Do It Yourself by Donna Genett, Ph.D. 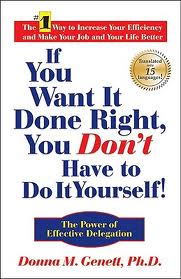 I chose this book as it was recommended to me by my career coach at my firm to improve my delegation skills now that I'm supervising our engagement teams when we're at the client.  Anyone who goes from working independently or only being responsible for their own work to a position of management/supervision knows that it's a difficult transition as you learn to be responsible for the work of others and not trying to do everything yourself.

RECOMMENDATION: Great book!  Again, not a very long book, but the principles learned are invaluable!

ABOUT THE BOOK: The book is written in story format, telling the story of two cousins who are more like twins - doing everything together and being good at the same things - until they are promoted to management positions within the same company.  One of the cousins struggles with delegation and running his group effectively, and goes to the other for advice, as the other cousin is thriving in his new position.  The one cousin teaches the other six steps to effective delegation that we should all use, not just in our work life, but in every aspect of our life.  The steps outlined have already improved my delegation of tasks this week, and will surely make a positive impact going forward.

So there you have it, the last three months worth of reading!  I haven't finished June's book yet, but I will shortly and it's a good one!