We went on our Ward camp-out this past weekend to Ellsworth Park. It is an actual camp-ground about 30 minutes outside of Denver in the mountains that the Church owns for members to use! It was beautiful and very nice with bathrooms, running water, pavilions, volleyball courts, kick ball field, swings and park for the kids, and a cool amphitheater with a fireplace for our fireside that night. We had about 100 people there for the dinner and then about 60 stayed overnight.
We had a great time getting to know new people in our ward and just being with friends for the activity. 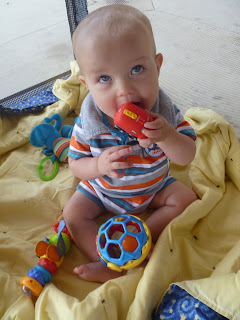 This is Luke in his pack-in-play. I took it so I wouldn't have to hold him the entire time we were there. It was so nice to put him down and let him play. 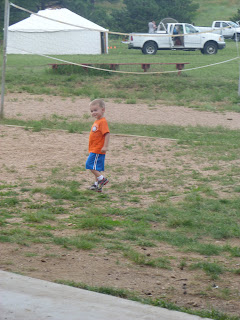 We were excited to get there and were some of the first people there. Levi is checking out the camp. We actually slept behind that white Yurt in the background. A member of our Bishopric built that and sets it up every year and has practically a house to camp in! 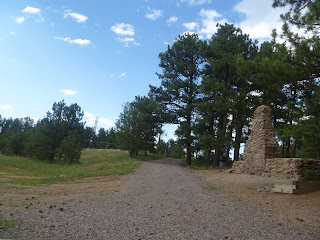 Thanks to Levi we have one picture of the campsite. Well mostly the road but you can see the fireplace that we all sat around Friday night for songs, chubby bunny, stories, and s'mores. 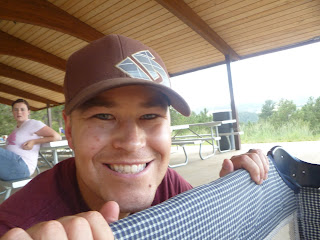 Another picture courtesy of Levi. He is a true Skelton every time he can get a hold of a camera he is snapping away! 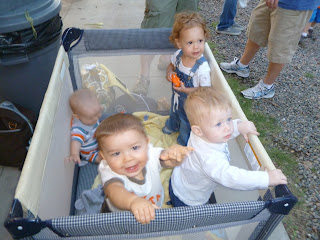 Luke was pretty popular with the coolest place to hang out! He had quite a few friends visit him in is pack-in-play throughout the night I think 4 was the most at one time. 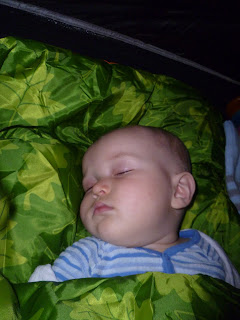 My boys love camping and Luke sleeps just as well in a tent as anywhere else. 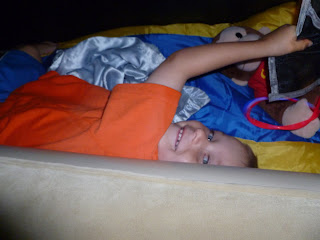 Levi was lucky and didn't have to go to bed until about 11:30 and loved every minute of it! We just wonder why he inherited the Skelton go to bed late gene and the Trail wake up early gene. He was up at 6:20!!! Can someone please tell him that is NOT enough sleep! The next morning we got up and had amazing breakfast burritos and played some kick-ball. There were crafts for the kids, treasure hunts, and games. Then we packed up and were gone by 10:30 am. We had a great time and were so glad we went! I wish I would have taken more pictures but for some reason I never have my camera when I wish I had it!
Posted by Alicia at 5:55 PM